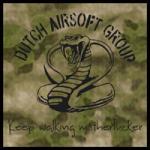 Nog geen beoordelingen
Zwolle, Netherlands
https://www.da-group.nl
secretaris@da-group.nl
Dutch Airsoft Group, also known as DA-Group, is a Dutch airsoft team which has it’s roots in the provence of Overijssel and is founded in 2011. Our Operators are mainly from The Netherlands. Fair play and team play are of high value within DA-Group, as is a tactical playing style. We’re not John Rambo and don’t need one either.

As an airsoft team we skirm at least once a month, but we try to play more often. Most of the time we skirm short (one day) skirmishes; these are the most common ones. However we do play com-sim weekends. Most of the time we play them at Airsoft Games. They really hit the spot right on with there props, locations and no-nonses cheating policy.

We use PMR446 radio’s for comms between our Operators or other squads on site. A PMR446 radio is free of use in most countries and uses the 446Mhz frequency. Our Operators choose their own replica’s; pistols, carbines, rifles, machineguns and grenades are used to play. As of January 15th 2013 airsoft guns are allowed by law. Thanks to the Nederlandse Airsoft Belangen Vereniging a.k.a. NABV the laws have changed in regards to own 1:1 airsoft guns. You need to be a member of the NABV to store your airsoft guns at home and play in The Netherlands. We expect more and more airsoft locations and organizations in The Netherlands in 2013.